We have begonias with fancier pants than the ladies of the Folies Bergères in 1910, Chrysanthemums brassier than Angie Watts circa 1987 and potatoes more purple than Prince’s paisley pantaloons (read Sally Nex’s blog for Crocus on the French heirloom potato variety ‘Vitelotte’). All the results of meticulous and laborious selection, over many painful years indeed – but still – just by selecting and manipulating specific forms, to breed in the characteristics we value. 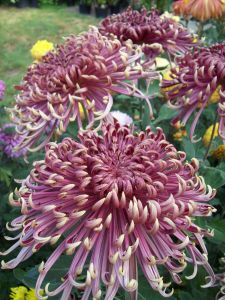 So. Given the almost infinitely ludicrous diversity of the plant kingdom – including a vine with a flower that resembles a pelican’s bill (Aristolochia grandiflora) and orchids that look like tiny people; mimic bats, moths, or pretty much anything in their immediate locale – the idea of deliberately mutating plants by blasting them with radiation seems… well… a bit mental.

I had never heard of ‘gamma gardens’ until a friend sent me a link to an article about experimental gardens or ‘gamma fields’ being developed by the Japanese and the Russians in the 1950’s and 1960’s; a practice later more widely known as part of the ‘Atoms for Peace’ pro-nuclear propoganda campaign launched by the Americans in 1955 to clean up the appalling image of the nuclear industry following the disastrous bombings of Hiroshima and Nagasaki in 1945.

The advancement of this original research is still being built upon today at Brookhaven National Laboratory in Long Island, New York, which opened in 1947 as an atomic research facility. However their research themes have broadened significantly to include such lofty enlightenment as ‘Exploring cosmic mysteries across the smallest and largest scales imaginable, from neutrinos to dark energy’ and ‘colliding subatomic particles to recreate matter from the dawn of time, and study the force that gives shape to visible matter in the universe today’. The list of Nobel Prizes is a little dizzying. Perhaps a bit beyond my pea-brained forays, but still. We press on. 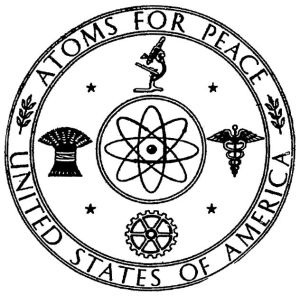 ‘The Atomic Gardens grew out of post-WWII efforts to use the colossal energy of the atom for peaceful pursuits in medicine, biology, and agriculture. ‘Gamma Gardens’ at national laboratories in the US as well as continental Europe and the USSR bombarded plants with radiation in hopes of producing mutated varieties of larger peanuts, disease resistant wheat, more sugary sugar maples, and African violets with three heads…’

Improbably, an irradiated peanut fell into the hands of an housewife and atomic gardening enthusiast from Eastbourne, one Mrs. Muriel Howorth. The said peanut was gifted by progenitor Walter C. Gregory of North Carolina State College, U.S.A, and became a local celebrity in its own right when it sprouted and grew to gargantuan proportions in Mrs. Howorth’s back garden in Eastbourne.

Here’s a postage stamp, released for the launch of ‘Atoms for Peace’ in 1955 (just because I like it)

The experiments led by the Japanese, the Russians and in the USA under the Atoms for Peace banner sought to ascertain whether any desirable qualities could be bred into crops using radiation technology in a peaceful, productive, economically responsible and positive way: “It’s clear from reading the primary sources that most people involved were deeply sincere. They really thought their efforts would eradicate hunger, end famine, prevent another war.” Paige Johnson, Pruned, ‘Atomic Gardens’

The only known functioning ‘gamma garden’ appears to be the Institute for Radiation Breeding in Ibaraki, Japan; (please, if anyone has information to the contrary please correct me) although I wouldn’t be surprised if there were ‘secret labs’ all over the place. I once heard a rumour there was one in a disused warehouse in Fairfield, Hebden Bridge, specialising in a mutant strain of giant rhubarb. I can’t corroborate on the Fairfield facilities but the ones in Ibaraki are comprised of a purpose-built ‘gamma room’ (for irradiating seeds, bulbs, scions and tubers), a ‘gamma greenhouse’ for experiments on subtropical plant material, and a working ‘gamma garden’, for irradiating plants growing in situ – creepily arranged in concentric circles with a ‘radioactive pole’ in the centre to deliver the radiation.

‘basically a slug of radioactive material within a pole; when workers needed to enter the field it was lowered below ground into a lead lined chamber. There were a series of fences and alarms to keep people from entering the field when the source was above ground.

The amount of radiation received by the plants naturally varied according to how close they were to the pole. So usually a single variety would be arranged as a ‘wedge’ leading away from the pole, so that the effects of a range of radiation levels could be evaluated. Most of the plants close to the pole simply died. A little further away, they would be so genetically altered that they were riddled with tumors and other growth abnormalities. It was generally the rows where the plants ‘looked’ normal, but still had genetic alterations, that were of the most interest, that were ‘just right’ as far as mutation breeding was concerned!’

‘That’s a pretty direct route; the genetic change produced by irradiation remains in the commercially cultivated variety, as my research shows so far. So yes, it is possible that someone, planting atomic seeds in their allotment, produced a plant with a genetic mutation that was robust enough to still possess the mutated ‘feature’ today.’

It is impossible not to ask yourself why we need to ‘hurry’ more desirable genetic traits into crops using radiation when we already have plenty of diversity and disease resistance in existing plant material.

‘Atomic gardening’ was considered a fast route to selecting desirable genetic traits in plant material, and a primitive precursor to modern genetic engineering and GMO techniques – although the safety of the end product is arguably less controversial.

Gamma gardens have produced many cultivars of irradiated crops with ‘useful’ mutations. Positive mutations in specific plants have been identified and directly utilised in commercial production, including the ‘Rio Star’ grapefruit, widely grown in Texas – famed for their ultra-red flesh and juice – and the psychadelic sounding ‘Purple Orchid III’ a mutagenic sweet potato grown by the Chinese. FROM SEEDS TREATED IN SPACE. YES. IN SPACE.

Ipomoea batatas (sweet potato) Not necessarily Purple Orchid III, but as you would expect it to look… Picture Donavan Govan

In the mutagenic varietal olympics, The People’s Republic of China definitely gets the gold for the most mutagenic varietal cultivars released globally at 25.2%. With silver, Japan wins with 15%, and in bronze position is India, with 11.5%.

Perhaps unsurprisingly – given the celtic and anglo-saxon penchant for getting out of our minds, gamma gardens have offered us ‘Golden Promise’ barley – a salt-tolerant dwarf-mutant barley form used in the brewing industry for beer and whisky – and we took it. Interestingly, the Whiskies of Scotland PR machine fails to mention their choice barley cultivar was created using radiation.

I’m guessing that most of us would be clueless about the ‘atomic heritage’ of plant material or seed. In the same way as many products made with GMO crops are unlabelled,  ‘it is unclear how many of these varieties are currently used in agriculture or horticulture around the world, as these seeds are not always identified or labeled as being mutagenic or having a mutagenic provenance’. *shudders*

Obviously this is not the piece. Nor is it actually Andy Warhol

Track of the Month
‘Atomic’, by Blondie